A million sources and the Milky Way on an x-ray map of the entire sky: the data of the eROSITA telescope onboard orbiting observatory “SRG”.

A week ago, the telescopes ART-XC and eROSITA onboard the SRG orbiting observatory concluded the x-ray scanning of the entire sky. It has been already reported on, but the map construction and determination of the source numbers discovered during the scan are being continued. As agreed years before the launch, Russian scientists process the data from one side of the sky, and German scientists (eROSITA telescope created in Germany) work with X-ray photons that came from the other half of the sky. The all-sky map built by scientists of two scientific consortia and shown in the illustration turned out to be surprisingly informative. 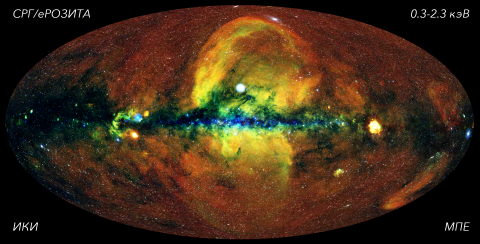 Read more on the IKI RAS website (In Russian)