The JINR precision inclinometer was installed in Garni

When the benefits of science are discussed, practical application of its achievements for life and health of people is considered as a compelling argument. Scientists keep repeating that not only the experiment is important, but also the process of its preparation, when fundamentally new devices, original methods and approaches emerge. One of the recent examples of this was when a device was invented for CERN, but it might be useful in future for saving human lives.

During several years (#50, 2014 and #51, 2016) the JINR Weekly Newspaper has been observing development of a new device, the Precision Laser Inclinometer (PLI), in the Dzhelepov Laboratory of Nuclear Problems JINR. The first related article was published when the RF patent was obtained. Then, the Newspaper informed on how the device installed in the CERN tunnel is operating. Nowadays, it is possible to list the stages of development of this Russian invention. Each of them is a confirmation of the demand for accurate measurement of the earth’s vibrations and high characteristics of the device. This spring, an instance of the PLI was installed in Armenia, in the tunnel of the Garni Geophysical Observatory (GGO). At the moment, it operates in the normal mode thus serving to seismologists.

Please, get acquianted with prolongation of the project “The Precision Laser Metrology for Accelerators and Detector Complexes” for 2019 – 2021

The scientific leader of this area Yulian Budagov highlights that operation of the inclinometer is based on the property of the liquid to preserve the horizontal surface at the slopes of the earth’s surface. The laser beam directed at such a surface is reflected. If this reflection is registered, then it is possible to study the slopes of the Earth. “We manage to do it with the accuracy exceeding the capabilities of similar devices 10,000 times,” – one of the device inventors, DLNP Senior Researcher Mikhail Lyablin said. “In fact, we have invented an angular seismograph that records the angular oscillations of the earth’s surface with the accuracy of 2.4×10-11 Rad / Hz (in the range from a millionth of a Hz to 4 Hz).” 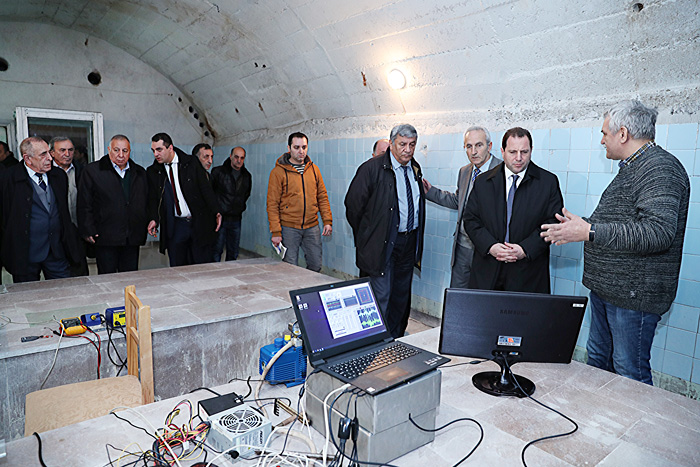 Location of the inclinometer in the GGO tunnel

Creation of PLI was launched in 2009. The first prototype was made for CERN and worked there “outdoor” in 2010-2012. In 2012, the patent of the Russian Federation was obtained, and several other stages were passed since then: work in the transport tunnel at CERN, study of the characteristics of the PLI in the air environment (2012-2014), in vacuum (2014-2015). Since 2015, the creation of a professional PLI started.

One sample of the JINR professional PLI was installed at CERN, in particular, in the location area of the Large Hadron Collider, and since autumn 2017, monitoring of seismic activity in the CERN region began. In February 2018, the second sample of the professional device was delivered to Armenia and installed in the tunnel of the Garni Geophysical Observatory (GGO). Now, the pulse of the Earth, its reaction to tectonic processes and human activities are registered with the highest possible accuracy in two places of the planet.

The Inclinometer’s design presupposes its further development, and such work is already underway. “First of all, – Scientific Researcher of DLNP N.Azaryan said, – It is transfer of the inclinometer to the microcomputer platform that will increase significantly its fault tolerance and reduce the cost of the device. In addition, it is necessary to establish a server to take data from our PLIs and develop software for processing data from a network of inclinometers. The work is carried out in cooperation with the Armenian company “Chirac technologies”.

Minister of EMERCOM of Armenia D. Tonoyan and Head of the Laboratory of the Institute of Geophysics and Engineering Seismology L. Akhverdyan

In the Garni branch of the “Seismic Protection Service”, there is a tunnel with a developed infrastructure in which PLI can operate next to the seismological equipment. A tunnel is necessary for the inclinometer because of high sensitivity of the device, any change in temperature or humidity will greatly affect the accuracy of obtained data.

Mutual interests of Armenia, as a country with high seismological activity, and JINR led to a new scientific union, and in March 2016 the first meeting on issues of JINR-GGO cooperation was held at which development of the professional PLI was discussed among other issues. In June 2016, the agreement between JINR and GGO was signed in the frames of which joint work is still successfully being conducted now.

Since the instance of the professional PLI was transported to and after testing and adjustment installed in the tunnel of Garni, Armenian seismologists have data that is 10,000 times more accurate than data obtained with the devices used before. It will significantly influence the accuracy of earthquake predictions.

Representatives of the Joint Institute for Nuclear Research G. Torosyan and N. Azaryan

On 13 February 2018, when the device was installed, Minister of EMERCOM of Armenia David Tonoyan opened the meeting with participation of representatives of Armenian scientific centres of Garni. The meeting was attended by JINR staff members M. Lyablin, N. Azaryan, G. Torosyan who delivered detailed reports on the parameters and possibilities of PLI. The need of establishing a network of several inclinometers in several locations in Armenia was emphasized at the meeting.

Thus, CERN, that already has one installed inclinometer, plans to purchase four more devices to monitor the spatial position of the proton beams along the perimeter of the Large Hadron Collider ring. Armenia also plans to develop a network of such devices.

The meeting on 13 February in the GGO Conference Hall

The correspondent of the JINR Weekly Newspaper asked M.Lyablin about longer-term plans and opportunities for the application of PLI. He noted: “We hope the device will allow seismic isolation of large facilities such as the LHC, the ATLAS, CMS, ALICE detector complexes. It will also be very useful for the long-term seismological observation of the terrain, detection of accumulated seismic energy, that is, for predicting earthquakes. However, we assume other applications as well. With the help of this device, it is possible to create a seismically isolated platform that will allow conducting physical experiments in seismically isolated conditions. PLI will help create seismically isolated sensing elements of antennas for experiments to determine the gravitational constant with high accuracy. The inclinometer will be in demand for providing seismically isolated conditions for production of modern microelectronics.”

Following the materials of the article by Galina Myalkovskaya,
JINR Weekly Newspaper,
photo by the press office of the EMERCOM of Armenia